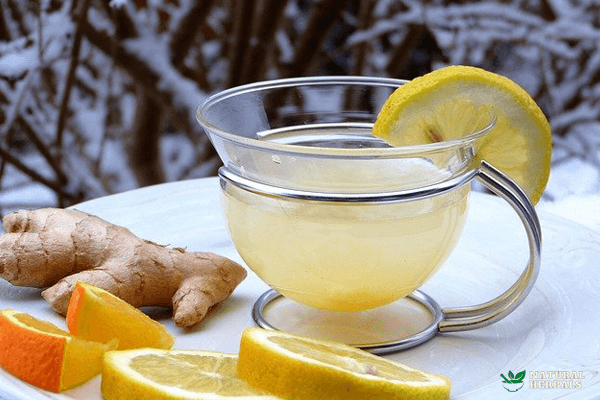 Ginger is not just an aromatic spice. Its root is one of the best researched natural medicinal resources. Modern science confirms many of its traditional uses. What medicinal properties does ginger have? Does it help against colds? How and in what quantities should ginger be consumed in order for it to have its healthful effects?

History and origin of ginger

Ginger (Zingiber officinale) is classified as a spice. It is one of the healthiest spices in the world. The underground part (root) is considered edible. What does a ginger rhizome look like? It is a fork-branched root that forms segmented, elongated tubers covered with a light brown, thick, wrinkled skin. The botanical name ginger refers to the appearance of the rhizomes; it is derived from Greek and means “shaped like the antlers of a deer.”

Ginger is native to Southeast Asia, the area of present-day northern India. In modern times it also grows in China, Indonesia, Iran, Thailand, Cameroon, Nigeria, Bangladesh, Nepal, the USA and the Philippines, but India is the largest producer of ginger. Ginger came to Africa with the expansion of the Arabs. It was also known in ancient Greece, where it was eaten during lavish feasts to avoid nausea.

Its properties were described already by the ancients: the Greek physician Dioscorides and the Roman botanist and philosopher Pilinius the Elder. However, ginger had the greatest significance in medicine in the regions where it originated. Ginger was used in traditional Indian, Chinese and Persian medicine. It was used to treat many diseases and ailments, including:

Properties and effects of ginger

A number of medicinal properties have been attributed to ginger root, and initial promising research results have caused scientific interest in the effects of ginger to increase significantly in recent decades. More than 100 bioactive constituents have been isolated from ginger, which fall into the groups of volatile compounds monoterpenes and sesquiterpenes:

Among them, gingerols are of the greatest therapeutic importance – substances that are strongly anti-inflammatory and reduce oxidative stress, which is the cause of many modern diseases.

The properties and effectiveness of ginger root have been studied in a very large number of randomized clinical trials. Based on a meta-analysis of 109 studies published in 2020 in the journal Nutrients, the following medicinal properties of ginger were confirmed.

Ginger is also effective in reducing vomiting with retrovirus infection. Results for nausea suppression in people with motion sickness mostly indicate that ginger root is effective compared to placebo.

Ginger affects gastric function, the speed of digestion and the rate of gastric emptying. Its intake helps with the feeling of heaviness after an overly heavy meal and accelerates the absorption of nutrients. These properties of ginger root can be used as a treatment for chronic indigestion.

Ginger has an analgesic effect

Ginger’s properties include analgesic effects. Ginger has the strongest analgesic effect in relieving menstrual pain, producing the same effects as the popular drug ibuprofen. It is also effective for headaches and migraines, sacral pain, and to a lesser extent for muscle pain and osteoarthritis pain.

Ginger has anti-inflammatory effects. Its intake reduces the production of pro-inflammatory cytokines in the body and affects the expression of the FOXP3 gene linked to the occurrence of rheumatoid arthritis.

RA is the disease where the anti-inflammatory health properties of ginger seem to be the strongest. For inflammatory bone and joint diseases, taking ginger works as effectively as ibuprofen for hip and knee pain.

Metabolic syndrome is a health condition in which problems such as hyperinsulinemia, insulin resistance or type 2 diabetes, hypertension, abnormal lipid profile, abdominal obesity, pro-inflammatory condition and others coexist (not necessarily all at the same time). This is a very common problem in the societies of developed countries.

Ginger is effective in treating the common cold caused by RSV, a common cause of upper respiratory tract infections. Ginger root also inhibits the growth of many bacteria, including those that cause pharyngitis.

A very common bacterium found in the human mouth is Staphylococcus aureus, the presence of which often causes pus to form on the tonsils. Ginger is very effective in inhibiting the growth of this bacteria, treating throat infections.

Ginger root exhibits numerous health and medicinal properties beyond those mentioned in this article. However, their confirmation requires more high-quality scientific research. Ginger probably helps with:

Harmfulness of Ginger – Contraindications to Ginger

Ginger is considered safe and the side effects of its use are mild and include:

However, ginger’s harmfulness may manifest itself in certain medical conditions in which it is contraindicated. These include inflammation and stomach ulcers, since ginger increases the secretion of gastric acids, which can aggravate complaints. Also, if blood clotting is too low, ginger can be harmful because it further lowers it.

It should also be noted that according to the official scientific position, ginger is safe for pregnant women and has no side effects. It is also not harmful to children.

Ginger’s harmfulness may manifest itself through interactions with medications taken. Individuals who use:

Users should supplement ginger with caution and in consultation with their doctor. This is because ginger has been shown to lower blood sugar, affect blood pressure factors and is an anticoagulant. It may be necessary to reduce the dosage of medications taken after using ginger.

Ginger can be used in many forms. Ginger powder and fresh ginger root are the most common.

1000 mg of ginger powder is equivalent to 4 g of fresh grated ginger root.

How much ginger a day can you eat? Doses appearing in scientific studies range up to 5 g of powdered ginger, however, administered in capsules. Eating this amount of ginger root powder straight on a spoon is very unpleasant due to its pungent taste. However, ginger does not need to be taken exclusively like a supplement.

It can be used as a dietary ingredient: powdered as a spice for Asian and Arabic dishes and desserts such as ginger cookies or pumpkin and apple cake. Fresh ginger root, in addition to being added to dishes (recipes abound), can be eaten as an ingredient in fruit and vegetable smoothies and juices.

Pouring hot water over sliced or grated fresh ginger and boiling it for 10-30 minutes produces a stock that also has medicinal properties.

Such a decoction can be combined with lemon juice and honey. This recipe is often used for colds. Powdered ginger teas with different ginger content are also available. Therefore, you need to read the composition before buying to make sure that the tea will actually work.

How much ginger to eat a day for ailments?

For period pain – 500 mg of ginger powder 3 times a day, starting 2 days before the first day of menstruation and continuing up to and including the third day of your cycle

In general phytotherapy, it is assumed that the compounds included in the raw material stimulate the secretion of saliva, gastric juice, pancreatic juice, bile, and reduce the feeling of nausea, e.g. in the case of the so-called hangover after drinking alcohol. In addition, a properly processed rhizome (most often dry powder) has an effect of suppressing vomiting (including vomiting induced by chemotherapy, motion sickness). Ginger is also effective in the fight against headaches, balance disorders and diarrhea, also in children. It has a very high antibacterial and antiparasitic activity.

According to Ayurveda, ginger is the best and most satvich of all spices. It is said to be vishwabhesa , i.e. a universal drug, used primarily in the case of:

Dried ginger has similar effects to:

It should be taken in case of pain caused by cold and dampness (e.g. acute joint pain), lack of yang in the kidneys, cold mucus sydrome in the lungs (bronchitis, pneumonia). In addition, it is recommended for the attack of toxic factors, strong emotions, anxiety, pallor, nausea and vomiting.

According to Ayurveda, ginger works on all body tissues, but primarily supports the respiratory and digestive systems. It reduces the dose of vata and kapha, while increasing pitta. It has a spicy flavor, sweet vipaka and warming vortex, and strong sathwic qualities. Dried ginger is perfect as a pain reliever, in the form of a paste. It can be mixed with water or honey and applied to sore spots.

Fresh ginger, like dried ginger, has a pungent breed (flavor), but also a pungent vipaka (digestive effect) and a warming vortex (effect), which acts on all dhatu (tissues) and remains sathwic. It mainly affects the digestive and respiratory systems. Fresh ginger has a stronger diaphoretic effect than dried ginger, so it is more suitable for colds and flu.

Mix and take teaspoon of the mixture twice a day with water.

Brew a large piece of fresh ginger with half a lemon without the peel. Add 1 teaspoon of cumin seeds and a pinch of salt.

Boil 2 teaspoons of chopped ginger with a pinch of salt.

After a teaspoon of dried ginger, black pepper and pippali pepper. Mix and take half a teaspoon 2 times a day. The mixture can be mixed with water or honey.

In Traditional Chinese Medicine, ginger has a yang-restoring effect, improving the yang circulation in the heart. It warms, dries, removes excess mucus, dispersing it. Eliminates chi stagnation and colds, warms the lungs, detoxifies, and disinfects. It has a pungent taste (metal transformation), hot nature, and influences the circulation of stomach and spleen fluids as well as the lungs of the heart and kidneys. 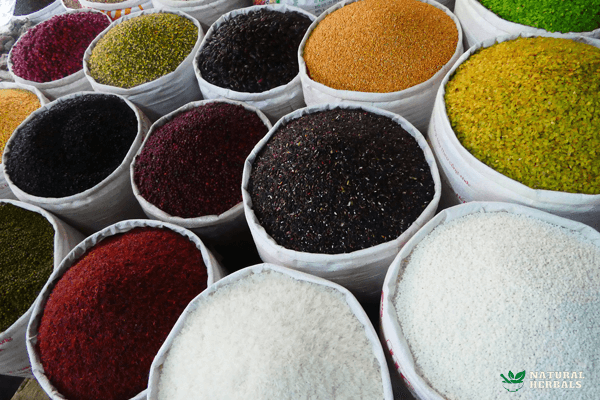 11 Cool Recipes to Make Your Own Spice Blends